A Case for Free Comfortable Public Transport? - By Bert Fabian and Sudhir Gota 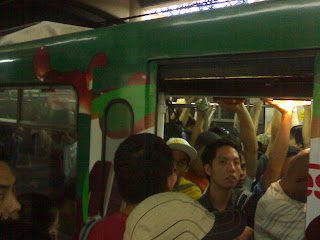 The following is the conversation between two transport professionals who promote sustainable and equitable transport -- Bert Fabian, a native of Manila and Sudhir Gota who hails from Bangalore in India and used to work full time building roads -- travelling from their Ortigas (business district) office to see old Manila using the MRT3 and LRT1 at 7:30pm, Friday, 6th of February 2009.
Sudhir standing at the platform waiting for the train – Let’s see if the trains arrive every 5mins… Oh no! Bert, look at the overcrowding in the train. Do you think we can get inside? I thought we’re moving against the flow of traffic? Traffic jams should be on the other side, right? Strange, isn’t it?
Bert standing next to Sudhir – Just push yourself inside the train, man! I agree it’s strange. It doesn’t used to be like this before. Now all the trains, at all times, in all directions are crowded! That means, MRT3 is now in crash capacity! Land use consumption patterns must have also drastically changed. Manila urgently needs more coaches for MRT3 and of course, buses running at grade. We urgently need good public transport!
Sudhir trying to push himself in the train – No, I cannot get inside. Let’s catch the next one. Why should I pay to travel in such a crowded train where I cannot even stand without pushing against other people? Better, let’s take a taxi and sit comfortably in a car and hope we don’t get into traffic jams. It’s better to sit inside a traffic jam than ride this train.
Bert – The question is not whether we can afford to travel in a taxi or by car. The question is why people are being treated like animals travelling in an overcrowded train? Where is the human dignity in this? I know they could have easily increased the number of trains during peak hours. What do you think of providing free public transport, Sudhir? I know these are gaining popularity in some places, I heard Portland, Oregon and I think some Scandinavian and Scottish cities toying with the idea.
Sudhir – Public transport, free? From where will they get the money? Many public transport associations are loosing money all over Asia. People travelling in cars are also struck in traffic jams? How ‘bout spending more on infrastructure and building more roads? This is what governments always want to do. I hope you‘ve seen the latest research from Kent Hymel – Does traffic congestion reduce employment growth? Study says, if we put more money on roads, we can get back the money because of increase in employment and economic growth.
Bert – The question is if we provide comfortable free public transport, don’t you think we can get the same results without harming the environment and climate? The need is not more roads for cars but for mobility and accessibility to all. Ok. In answer to your question, do you realize that the environmental benefits are reaped by the rich people travelling in cars which occurred due to people travelling in public transport? Suppose I travel in a car of say 4 years old, diesel SUV for 20 km everyday for 330 days in a year, how much CO2 and particulates (PM) you think I would emit? On the other hand, assume I travel in an overcrowded bus with 60 people, or train if you like, I would emit far more less CO2 and PM, right? If I travel in a bus, I make only around 7% of the emissions by a person travelling in a car. Don’t you think the polluter (cars) should pay for my journey? Do you know that the walk we took from the office to MRT station exposed us to high emissions generated by drivers driving in air conditioned vehicles? Many research studies have proven that the most vulnerable are the people who walk, cycle and wait at bus stops.
Sudhir – Right, right, I’m beginning to understand the logic. But there are few holes in your argument. Why do you consider 60 people bus all the times? There can be less number of people during the journey. Also if I am travelling in a hybrid car I would emit far less….

Bert – Excellent point. Consider only 20 people are in the bus all the time. Still I am emitting only 20% approximately. I am not against cars, totally. What I would like to see is less usage, stricter guidelines, and really equitable transport. As Lee (Schipper) suggests “we need to attack all the components”. Improve fuel quality, tighten emission standards, improve technology, increase costs of parking, etc. etc. Pedestrians and public transport users should be accorded special benefit, like wider & comfortable pedestrian walkways, free comfortable public transport, and … When we can spend billions on subsidizing fuel, I think we can always change fuel taxation to fund for better, efficient public transport, maybe even consider it free! Let us not argue about owning cars or not. If everybody gets a car tomorrow and gets to use anyway he or she likes, can you imagine what the city would look like? 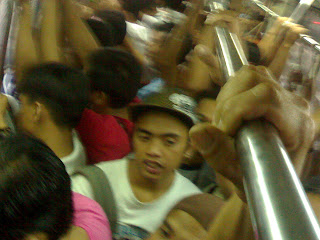 Bert – The idea may not look exciting at the start and some people may mock us for this. But I think this should be given serious thought. When we put all the facts and the environmentally good factors, all the pieces of puzzle would fit together. Remember Gandhi’s quote – “First they ignore you, then they laugh at you, then they fight you, then you win!!!! For now, hold your wallet and push yourself inside the train…

After four trains, both we’re able to squeeze in…

Posted by Clean Air Initiative for Asian Cities Center at 1:43 AM

Check out these Blogs!